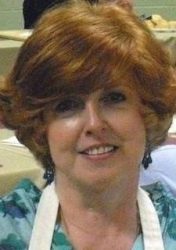 Maude Elizabeth “Liz” (Shock) Robinson-Cerrato of Louisville, OH, passed away on Wednesday, September 28th, 2022 at the Aultman Compassionate Care Center in Canton, OH. She was born at St. Joseph’s Hospital in Buckhannon, WV on July 21st, 1946 to the late Maurice and Goldie (Varney) Shock. Liz graduated in 1964 from Webster Springs High School in Webster Springs, WV, where she was a majorette, secretary of her class, a member of the Future Teachers Association and Student Council. She received her Managing Cosmetology license at Riggs LeMar Beauty School in Akron in 1967. She was an active member of Holy Assumption Orthodox Church in Canton where she served as president of the St. Ann’s Ladies Guild and secretary of the Church Council for many years. She was loved and cherished by her church family, especially the children who knew her as “Auntie Liz.” She was a member of the Louisville Eagles Auxiliary and a former member of the VFW Post 3747 in Canton. She was also an avid reader and Cleveland baseball fan. She loved to karaoke, mostly at the former Phil’s Place in Louisville and Jimmy’s Restaurant and Lounge in Canton. She was a hairdresser for over 40 years, working for her dear friend, Patti Joy, at Patti’s Hair Place in Louisville and Deb’s Hair Place in East Canton, OH among others in Canton and Akron, OH.

In addition to her parents, Liz was preceded in death by her son, James “Jimmy” Holcomb, her brother, Charles “Pee Wee” Shock, and her loving companion, Wilhelm Fuss, of Canton. She is survived by her beloved children, Julie Robinson Hartwick, of Louisville, and Adam J. Robinson, of Canton, her brother, Maurice “Butch” Shock of Vienna, WV, cousin, Lois Jean Hamilton of Webster Springs, WV and many cousins, nieces and nephews.

She was a long-time lover of Basset Hounds and helped rescue them for over 20 years. She leaves behind her faithful fur baby, Dixie Bella Mia.

A special thanks to her dear friends and neighbors, David and Mary Kosita whose many kindnesses allowed Liz to remain independent. Also, thanks to the generous, loving caregivers of Aultman Hospice and the Aultman Compassionate Care Center who provided comfort care during her final days, as well as caregivers from other various agencies who provided care and companionship over the past several years.

Funeral services will be arranged through Stier-Israel Funeral Home in Louisville, OH. Calling hours will be on Monday, October 3rd from 6:00pm to 8:00pm at Holy Assumption Orthodox Church at 2027 18th St. NE, Canton, OH 44705 where a Panikhida service will be at 7:30pm, officiated by Fr. John Kennerk. A funeral Liturgy will be held at 10am on Tuesday, October 4th at Holy Assumption Orthodox Church. Burial will be at Chestnut Grove Cemetery, Replete, WV, Thursday October 6th 2022 at 12:00PM. By Morris Funeral Home of Cowen, WV. In lieu of flowers, the family requests donations to Holy Assumption Orthodox Church, 2027 18th St. NE, Canton, OH 44705 or BAGS Basset Rescue, 3555 Anderson St., Minerva, OH 44657. Online condolences may be left at www.stierisraelfuneralhome.com